This entry was posted on November 17, 2020 by gigarefurb. 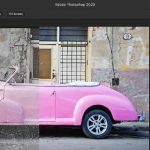 Arm64 processors are making a big play for the laptop market thanks to Qualcomm Snapdragon SoCs running Windows 10 on Arm and new Macs with the Apple M1 SoC. One of the best-known software applications on the planet is Photoshop, and it must run using emulation with Windows 10 on Arm or with Rosetta 2 on macOS Big Sur.

However, running Photoshop through emulation results in a performance hit which isn't exactly ideal. Luckily, Adobe has issued a new beta of Photoshop that can run natively on Arm processors found in Windows 10 and macOS Big Sur machines. For Windows 10, you'll need to have a Surface Pro X with at least 8GB of RAM. You'll also want to have Windows 10 Build 19041.488 or newer installed. In the case of Macs, your prerequisites are an Apple M1-equipped machine running macOS Big Sur.

Given that this is available in beta form, you're going to have to do a little bit of work to install it. Adobe explains:

This Adobe Photoshop for ARM BETA will only install and work on ARM hardware that meets the minimum system requirements. If you have qualifying ARM hardware and you do not see the installer, check manually for an update (Help > Check for Updates). If it still does not appear, try logging out/back into the Creative Cloud Desktop application.

And again, because this is a beta, Adobe also warns that this is not a fully functioning version of the software and contains "several limitations" versus the mainline version of Photoshop. However, Adobe clearly states that this feature gap will erode over time as it is able to add back in features that will take advantage of the unique capabilities of Arm hardware. The software developer also warns that users may experience some performance slowdowns during their testing.

It should be noted though that Adobe says that it will be adding features back in over the coming weeks, and hopefully any performance shortfalls will also be addressed during that time. For those that encounter problems while using the beta -- which will likely be everyone -- Adobe has setup a Photoshop (Beta) forum that you can post in to get help from staff and other community members.