This entry was posted on November 14, 2019 by gigarefurb. 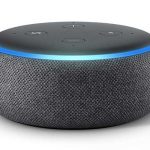 There's no question that Amazon is the dominate player in the smart speaker realm, and that is even more readily apparent by the latest sales data coming from Canalys. The analytics firm monitored smart speaker shipments during Q3 2019 and found that the market exploded by 44.9 percent compared to the same quarter last year.

At the top of the heap, as usual, was Amazon with 10.4 million Echo smart speakers shipped during the quarter. This represents a 65.9 percent annual growth rate for Amazon, giving it an overall 36.6 percent share of the smart speaker market. Canalys attributes much of Amazon's strength during the quarter to the release of the affordable, display-equipped Echo Show 5. The battle for second, third, fourth, and fifth place was tightly knit, with all of the players capturing between 12 and 13.6 percent of the market.

Two Chinese firms -- Alibaba and Baidu -- captured second and third place with 13.6 percent and 13.1 percent of the global smart speaker market during Q3 2019 respectively. The former experienced 77.6 percent year-over-year growth, while the latter showed the biggest gains of all players with a whopping 290.1 percent improvement.

Surprisingly, Google underperformed greatly compared to the market, chalking up a 40.1 percent sales decline for Q3 2019 compared to Q3 2018. Google witnessed shipments for the quarter drop from 5.9 million last year to 3.5 million this year, which was good enough for fourth place.

“The challenging retail environment and shipment decline compelled Google to seek more partnerships such as with Spotify, to drive sales through different channels," wrote Jason Low, senior analyst at Canalys. "We are also seeing similar collaboration trends in China where Alibaba leveraged its retail relationship and channel capabilities to run smart speaker collaborations with brands such as Starbucks, Budweiser, Abbott and Oreo among other local and international companies."

One prominent tech company that didn't make the list is Apple, which only has one entry in this market -- the $299 HomePod. Apple's HomePod sales have been so dismal so far that it is combined in the "Others" category.

We're likely to see smart speaker sales soar again in Q4 2019, as that it is the time that we typically see the deepest discounts on smart speakers, and they often make perfect gifts for friends and family.