Amazon Prime Day Kicks Off July 16th, Here Are Deals To Watch For 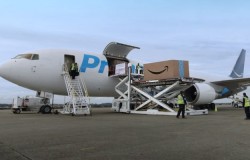 Amazon Prime Day, the annual event where the world's largest online retailer offers tantalizing discounts exclusively available to its Prime members, is slated to begin on July 16. This will be the fourth time that Amazon has held such an event, and this time around it will last a full day and half, giving Prime members plenty of time to sift through bargains.

The actual event kicks off at 12 pm Pacific (3 pm Eastern) on Monday, July 16, and runs for 36 hours before coming to an end on Tuesday, July 17. Last year the event ran for 30 hours, so Amazon is extending it for 2018. As with before, it will feature more than one million deals for Prime members around the world. Prime Day will also feature select deals at all US Whole Foods Market stores.

Amazon is adding more territories to the list as well. As with last year, Prime Day will be open to Prime members in the US, UK, Spain, Mexico, Japan, India, Italy, Germany, France, China, Canada, Belgium, and Austria. New for this year, Amazon is opening its Prime Day deals to Australia, Singapore, Netherlands, and Luxembourg.

"Prime members will enjoy a day (and a half) of our best deals, with 36 hours to shop more than one million deals worldwide," said Jeff Wilke, Amazon CEO Worldwide Consumer. "New this year, members can shop exclusive Prime Day Launches from hundreds of brands worldwide, enjoy exclusive savings at Whole Foods Market and experience surprise entertainment events unboxed from giant Smile boxes in major cities. More than 100 million paid Prime members around the world will find our best Prime Day celebration yet."

Prime Day has proven immensely popular for Amazon, though there's also been criticism over the selection of deals, particularly after the initial Prime Day back in 2015. The selection and discounts seem to have improved with each successive Prime Day, however, so we're crossing our fingers for some juicy discounts.

Leading up to the event, Amazon is already offering some bargains as a teaser. Right now, for example, you can save $100 on the Echo Show. You can also save up to 50 percent on popular movies and TVs shows on digital, DVD, and Blu-ray; up to 25 percent on furniture and decor from Rivent and Stone & Beam; up to 20 percent off AmazonBasics items; and 30 percent off everyday essentials from Presto!, Mama Bear, and Solimo, among others.

If you're a gamer, Twitch Prime is giving away a free PC game every day through July 18, including titles like Pillars of Eternity and Brutal Legend. Members will also receive exclusive in-game loot for Warframe and PlayerUnknown's Battlegrounds.

We also got word from Huawei that it will be offering some nice discounts on various hardware when Prime Day kicks off. Specifically:

Bear in mind that those deals are not yet live, but will be on July 16. Also be sure to check back with us once the event kicks off, as we'll be posting some of the more interesting deals once we're privy to them.