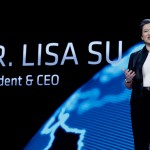 While Intel spent the majority of its CES press conference trying to convince the audience that its 10nm process was on track, AMD proceeded to build on its manufacturing process advantage, essentially announcing a full suite of 7nm solutions.

AMD President and CEO, Dr. Lisa Su delivered an enthusiastic, perhaps even infectiously so, presentation that focused squarely on high performance computing in every environment. From gaming, to scientific research, to content creation, to cloud server platforms, AMD is all about making things run faster and more efficiently.

At the heart of that high performance vision is that 7nm manufacturing process, which the company showcased a couple of months ago when it launched the high performance compute based Instinct GPUs, and officially announced the second generation EPYC server chip, based on the Zen 2 architecture.

Of course Su wasn’t just there to talk about products that had already been announced, and the really big news came in the form of the next generation graphics solution for gamers, the Radeon VII. Just like the Instinct GPUs announced last year, the Radeon VII is based on AMD’s 7nm process, making it the world’s first 7nm gaming GPU. With 60 compute units running at up to 1.8GHz, the Radeon VII can deliver a 25% performance increase over its predecessor while drawing the same level of power.

To demonstrate the power of Radeon VII, AMD fired up Capcom’s forthcoming Devil May Cry 5 at 4K resolution running smooth a silk at over 60fps. Su announced that the Radeon VII will start shipping 07 February at $699 (£546), putting 7nm GPUs into the mainstream market in a matter of weeks and only a few months after the HPC variant 7nm GPUs started shipping.

AMD pitted this pre-production eight-core third generation Ryzen chip against a similarly specced eight-core Intel Core i9 processor running Cinebench multithreaded benchmark. The result of the head to head was surprisingly close, with the new Ryzen chip only narrowly beating the Intel opposition. Far more significant was the fact that the third gen Ryzen chip performed the benchmark while using considerably less power, highlighting the power advantage that the 7nm process can deliver.

According to Su, we’ll see third gen Ryzen chips hitting the market around the middle of 2019, essentially the same timeframe as the 7nm EPYC chips. If AMD hits its targets, it will have a full complement of 7nm solutions on the market months before Intel has pushed a 10nm chip out the door. With that in mind, it’s easy to understand what’s driving Su’s infectious enthusiasm.