This entry was posted on December 26, 2019 by gigarefurb. 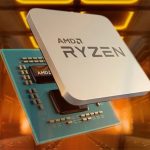 AMD hasn't been in this good of a position in years, and it has its Zen processor architecture mostly to thank for it. First introduced in 2017 with the first-generation Ryzen 1000 family, the Zen family has expanded to cover consumer desktop, HEDT, mobile, and data center platforms. AMD's newest generation of processors, which were introduced mid-year, are using the company's 7nm Zen 2 architecture.

Those new Zen 2 processors -- Ryzen 3000 on the desktop, EPYC 7002 for enterprise -- are providing strong competition for Intel, and as a result, has helped AMD to gain market share and clout with customers. As of today, AMD stock is hovering at an all-time high of over $46 in intraday trading. Over the past month, the stock is up over 15 percent. YTD, AMD stock is up 2.5x; it started off the year at $18.83.

The Ryzen 3000 desktop family has been especially beneficial to AMD's bottom line, as the many-core processors have been handily tackling the best that Intel has to offer -- particularly in multi-core benchmarks. When the Ryzen 3000 family first launched over the summer, the company's high-end offering was the Ryzen 9 3900X, which is a 12-core/24-thread processor. In November, AMD extended the family with the 16-core/32-thread Ryzen 9 3950X, which is an absolute beast from our own testing.

To throw salt on Intel's wounds further, AMD dropped its Ryzen Threadripper 3960X and 3970X HEDT many-core processors in November, in 24-core/48-thread and 32-core/64-thread configurations. While The new third-generation Threadripper parts offer comparable single-threaded performance (long an Intel strong suit) versus Cascade Lake-X and Skylake-X processors, multi-threaded performance is simply too strong to ignore, and in some cases in a different league all together at comparable price points.

Looking towards 2020, AMD's next big processor release will likely be the Ryzen 4000 APU family, which will be found in both laptops and desktops. We've seen leaked benchmarks hit the internet for laptop variants of Renoir like the Ryzen 5 4600H, Ryzen 7 4800H, Ryzen 9 4900H and the Ryzen 9 4700U. In the case of the Ryzen 9 4900H, we're looking at an octa-core processor capable of executing 16 threads, which could make it a productivity and content creation champ. Mobile has long been an Intel stronghold so if AMD makes headway here, it could be huge.

Perhaps AMD's most important product launch in 2020 -- besides the expected Ryzen 4000 desktop processors -- will be the Zen 3-based EPYC 7003 processors. EPYC 7001 was a wakeup call for Intel in the enterprise market, while EPYC 7002 has been firing on all cylinders offering up to 64-cores and 128 threads of processing power. EPYC's strong multithreaded performance is what leads AMD to believe that it can hit 10 percent server market share by Q2 2020, which is bread and butter high margin business for INTC.

Zen 3-based "Milan" EPYC 7003 processors will be based on TSMC's 7nm+ process technology and will further ramp up performance "right in line with what you would expect from an entirely new architecture" according to Forrest Norrod, AMD General Manager for the Datacenter and Embedded Solutions Business Group. Looking further down the road, Zen 4 "Genoa" EPYC 7004 processors will adopt 5nm process tech -- which reportedly already has yields surpassing 50 percent – and could allow AMD to "drive significant IPC gains each generation" according to Norrod.

All of these factors are leading to investor confidence in AMD, and the company's ability to execute on its roadmap with exacting precision. We also can't discount that fact that AMD has a lock on next-generation gaming consoles, as both the Xbox Series X and PlayStation 5 will also be powered by Ryzen 3000 processors.

That’s not to say that AMD doesn’t have room for improvement. While the company has plenty of strong solutions in the low-end to mid-range market with its 7nm Navi-based GPUs, it still doesn’t have anything potent enough to counter NVIDIA’s top-of-the-line gaming GPUs like the GeForce RTX 2080 Ti. The closest that AMD comes is with the Radeon VII, which offers performance that falls in between the GeForce RTX 2070 and RTX 2080.

And even with all of Zen’s strength in the consumer desktop and enterprise markets, AMD has still failed to crack Intel’s dominance of the mobile market. Intel’s 10nm Ice Lake parts have further strengthened its position, but the company's hope is that Renoir will put AMD firmly in the driver’s seat. Whatever the case, AMD’s 2020 outlook is filled with many more upside opportunities than challenges , and its current stock price is reflective of those hopes an aspirations.