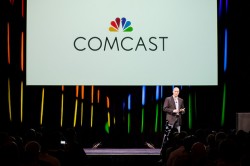 There is a lot of turmoil going on in the cable TV market right now, with plenty of shakeups taking place. The wild swings in the marketplace and rise of companies like Amazon, Google, and Facebook with regards to video delivery is precisely why AT&T is looking to hook up with Time Warner to better compete.

Quarterly earnings are in for some of America's top cable providers, and the numbers aren't looking good with respect to subscriber counts. Charter reported that it lost 122,000 video subscribers for its most recently completed quarter. What's interesting is that this figure is far above the 43,000 loss that analysts were predicting. Things weren't much better at Comcast, which lost 96,000 video subscribers last quarter. AT&T's TV business lost a whopping 187,000 subscribers during the quarter.

AT&T's loss on the subscriber front was somewhat blunted by the addition of over 300,000 customers to its DirecTV Now streaming service. However, as Investorsreports, AT&T doesn't garner as much profit per customer from DirecTV Now subscribers, as packages can be had for as little as $35 and are discounted for AT&T wireless customers.

So, what is the reasoning behind the steep drop in numbers for the cable giants? One reason is likely due to higher prices across the board for customers. As we reported last week, the cost of TV packages has soared 74 percent since 2000. According to Kagan, S&P Global Market Intelligence, the cost of premium TV packages has risen from just under $60 at the turn of the century to nearly $100.

The second reason is due to the proliferation of alternative avenues for watching video content. Today, we don't have to plop down on the couch or lounge in bed to watch content; we can simply pull out our smartphones or tablets and watch or favorite movies and TV shows from anywhere. Services like Sling TV and DirecTV Now give customers more flexibility at lower price points than traditional cable packages.

Over-the-air programming, while not exactly sexy, gives customer free access to network channels like ABC, CBS, NBC and Fox in HD quality. Couple that with a Netflix subscription and a service like AT&T Watch (which is supposed to launch at any moment and will be free for wireless subscribers), and video needs of most families could be fully satiated.