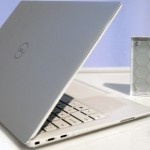 When it comes to technology, most things get better with time as new iterations are introduced. Consider the first smartphone you ever owned, and how it compares to the one you have now, for example. The same is true in the land of laptops, and Dell in particular has been relentless in pushing forward its thin and light XPS 13.
We had a chance to spend some hands-on time with one in the run up to the Consumer Electronics Show, where Dell has now unveiled its 2019 model (or more precisely, the XPS 13 9380). Dell is billing its latest model as "the most powerful 13-inch in its class," and thanks to an infusion of Intel's Whiskey Lake architecture, the XPS 13 has so far lived up to the claim in our tests.

That's hardly a surprise, given the specs. The configuration we've been playing with pairs an Intel 8th generation Core i7-8565U processor with 16GB of RAM and an ultra-speedy 1TB PCIe solid state drive from Intel's SSD Pro 7600p series.
A full review of this system is in the works, but we wanted to share some initial impressions of this "remastered" XPS 13.

As with the previous generation model, Dell shoehorned a 13.3-inch panel into an 11-inch form factor, resulting in very little wasted space for the chassis. In this case, the side borders measure a scant 4mm, and the top border is only slightly thicker at 5.98mm. These surround an InfinityEdge 4K display with touch support, which is an optional upgrade over the standard Full HD display.
It's a gorgeous display that is bright and vibrant, and according to Dell, it offers 100 percent coverage of the sRGB color space. We're still in the process of giving it a thorough evaluation, and we're especially interested in how it handles HDR content, as it's an "HDR-ready" panel. In regular content, though, images have looked fantastic so far.

One thing professionals will appreciate perhaps more than the display itself is that Dell finally positioned the webcam module at the top of the screen. Previously it took awkward residence in to the bottom bezel. The relocation of the webcam means no more worrying about showing off your nose hair during conference calls.

This may seem like a minor thing, and certainly it's something consumers will take for granted, as they should. However, from an engineering standpoint, Dell deserves kudos. In order to keep the top bezel narrow, Dell had to dramatically shrink the webcam module, and do so without sacrificing image quality. The end result is a pin hole that hides a four-element lens.

The XPS 13 has always been a looker, especially more recently with rose gold and frost versions, the latter of which is what we received. It's the first XPS 13 to introduce an arctic white woven glass fiber palm rest developed specifically for Dell. Simply put, the XPS 13 looks stunning (and will keep you honest in washing your hands regularly).

Looks are one thing, but what about performance? Here are some early results...

The Core i7-8565U is a 4-core/8-thread chip with a 1.8GHz base clock and 4.6GHz boost clock, and 8MB of SmartCache. It has a higher boost clock than the Core i7-8650U found in Lenovo's ThinkPad X1 Carbon, and so the Whiskey Lake chip propelled the XPS 13 to the top of our benchmark chart when sorted by CPU scores. 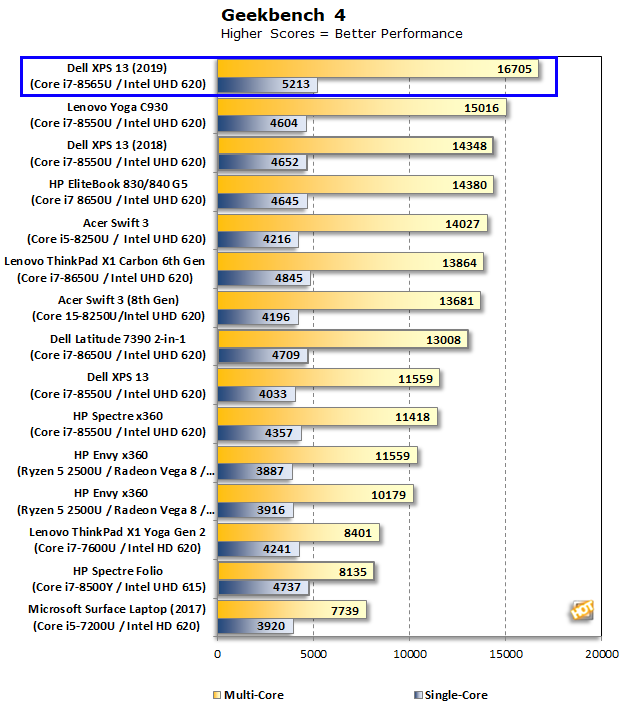 The margin of victory was even wider in Geekbench 4, with the XPS 13 taking the top spot in both single-core and multi-core performance. This is indicative of both the CPU itself, and the system's cooling, which prevents the XPS 13 from hamstringing performance with aggressive throttling.

In PCMark 10, the XPS 13 posted the highest overall score, and led each individual category except for Essentials, where it came in a close second.

The XPS 13 is built more for work than play, though the work Intel has put into its integrated graphics and related drivers is demonstrated here.

Overall, we're quite pleased with the performance from the XPS 13 so far. The system has been shredding our benchmarks, and doing so in style—this is elegant computing at its finest. We'll have our full evaluation soon, but in the meantime, we're awarding the XPS 13 a well deserved Best Of CES 2019 badge.