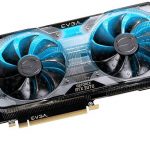 Surprise! Amazon is taking preorders for a pair of "Super" variants of NVIDIA's GeForce RTX series graphics cards that have not yet been officially announced. They include the EVGA GeForce RTX 2070 Super XC Gaming and EVGA GeForce RTX 2060 Super XC Ultra Gaming, priced at $599.99 and $499.99, respectively.
Officially, these cards do not exist yet. Rumor has it NVIDIA will unveil Super models of its GeForce RTX 2080, 2070, and 2060 next week on July 2, with availability to follow shortly after. The 'leaked' listings on Amazon support that notion—both product pages indicate a release date of July 9.

It should also be noted that these listings are actually by Amazon, and not a third-party marketplace seller. The implication there is that these are likely the real deal, with accurate pricing and availability information. Same goes for the specs, though the listings on Amazon do not mention the number of CUDA cores on either card.

The listings do, however, offer up basic details about the RAM and boost clock of each card. Here's a look...

Bearing in mind that nothing is yet official, past leaks and rumors also have pointed to the upcoming Super lineup having more CUDA cores compared to each card's non-Super version. Here's what was leaked earlier this month (with comparisons to the full RTX stack)...

So far there has not been any mention of the GeForce RTX 2080 Ti getting the Super treatment. That makes sense, given that it would still separate itself from the pack with a bunch more CUDA cores and the highest amount of memory. It will still be the top dog in the RTX family.
NVIDIA's rumored Super launch comes just ahead of retail availability of AMD's upcoming Radeon RX 5700 XT and Radeon RX 5700 based on the company's 7-nanometer Navi GPU architecture. AMD had shown its Navi cards stacking up favorably against NVIDIA's currently lineup in gaming benchmarks, but the upgraded Super variants could ensure that performance still swings in team green's favor, with ray-tracing support to boot.

We are getting ahead of ourselves, though. All we know for sure at this point is that two of the three rumored Super variants have now made an appearance on Amazon. Everything else is still speculation, at least until next week.