Fortnite Chapter 2: First glimpse of new season after map wiped out by asteroid 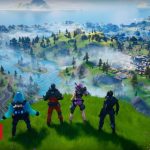 Less than two days after being hit by a massive asteroid and enveloped in a black hole, Fortnite is back online.

Season 11 - or Chapter 2 - is now live, with gamers getting used to a whole new map and updated gameplay.

Since Sunday night, the game has been offline, replaced by a livestream of a black hole on its Twitter page.

But now, there's a trailer to the new season.

From first glance (bear with me it's only just got back up and running!) the island as expected looks totally different from what gamers have come to expect.

In total there are 13 new locations to explore - before deciding which one becomes your go-to landing spot.

The most noticeable change for players in terms of gameplay are the new water based mechanics. From swimming to motorboats - Fortnite has added in ways to play that have been a constant feature in other Battle Royale games like PubG and Call of Duty.

Fans will be pleased that the game is live again sooner than some thought - with speculation online that developers had initially planned for Chapter 2 to appear on Thursday.

Developers now face a nervy wait to find out how the community reacts to the changes they've made to the most popular game in the world.

The way in which the game's makers have managed to build the hype around the update has been a masterclass in modern marketing - now they wait and see if the product they've made will live up to it.

For those who don't know - Fortnite allows up to 100 players to fight individually or as part of a team to be the last standing on a virtual battlefield.

When the game went down on Sunday night, Forbes' gaming writer Paul Tassi described the event as "the end of an era".

Fans had been predicting a dramatic finale of season 10 which kicked off in August.

Epic Games - which owns Fortnite - had confirmed "The End" event would take place on Sunday 13 October.

A countdown timer appeared in the game, above the rocket at Dusty Depot.

Players who were online during "The End" saw an in-game meteor shower which appeared to wipe out the Fornite map.

These players were then sucked into a rift and the screen was replaced with a black hole in the centre.

The launch trailer for Fortnite Chapter 2 racked up more than 700,000 views in less than two hours.