This entry was posted on February 20, 2020 by gigarefurb.

The breadth of business devices manufactured across HP’s line makes it tricky to pick out the wheat from the chaff. While there have been big hits, such as the EliteBook x360 830 G6, there has also been the odd misfire, for example, the Elite X2 1013 G3.

The 2020 Spectre x360 is the latest in a line of premium convertible 2-in-1s. Its angular design is an instant head-turner, but beneath the bonnet is a punchy 10th-gen Core i7 chip, and a blistering 4K display fitted into one of the sharpest frames on the market. The question is whether a device as slender as the Spectre x360 can sustain the performance levels and battery life demanded of a leading enterprise machine.

The Spectre x360’s clipped corners and sharp lateral ridges comprise its most eye-catching features, and contribute to a bold aesthetic. Combined with the bright silver sheen of its aluminium chassis, it makes for a device that oozes class. Our review model was coated in ‘natural silver’, but the Spectre x360 also ships in a stunning ‘nightfall black’ iteration with a metallic gold trimming.

This ‘gem cut’ design won’t appeal to everyone, but it gives the device a strong sense of identity. The look is otherwise fairly clean and minimalist, with an expansive keyboard adopting the same bright silver tone of its chassis. An element of contrast arises in the thin black bezels bordering its display.

While its design is sleek-looking, the dimensions are just about in line with rival 13in devices, although a 16.9mm height renders the Spectre x360 thicker than average. The Dell XPS 13 2-in-1, for example, is just 13mm thick, while the Microsoft Surface Laptop 3 measures a tad more slender at 14.5mm. Weighing at 1.3kg, meanwhile, it’s just about on par with all its clamshell rivals. 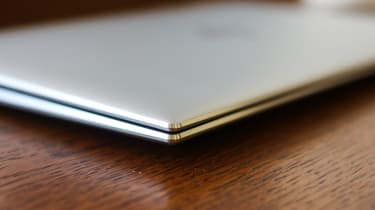 The Spectre is fitted with a glossy 13.3in 4K touchscreen display that looks fantastic to the naked eye and performs well when put through its paces.

Meanwhile, its 100% coverage of the sRGB colour gamut means the Spectre x360 is a fantastic option for graphics-intensive work, coupled with its limitless contrast ratio. The colours themselves are ever-so-slightly off under default settings, however, with reds and blues slightly undersaturated while greens are slightly oversaturated. This is nothing that can’t be recalibrated through colour profiling, however.

By contrast, the XPS 13 2-in-1 registers a slightly lower 97.1% coverage of the sRGB colour gamut, while the Surface Laptop 3 hit 97.5% with a weaker maximum brightness of 364cd/m2. Overall it means the 2020 Spectre is fitted with a vibrant display well-suited to graphics work.

HP’s spacious keyboard is unchanged from the previous model, and provides an outstanding typing experience but for a handful of key placement issues that render touch-typing a little ‘Jekyll and Hyde’. 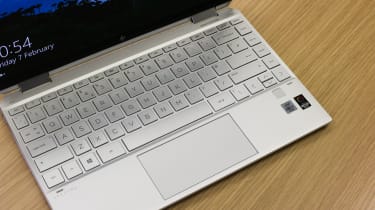 On the one hand, the chiclet-style keys are spacious, deep and provide a satisfying level of feedback, but the width can be a little jarring. Some keys are notably overstretched, while others, especially ‘Enter’, are too compact. As a result, you’ll likely find your flow interrupted by erroneously tapping the wrong keys as you initially find your foothold. The keyboard is fitted with a host of useful functions, though, including two levels of backlighting, and a shortcut to mute the microphone.

The glass-coated touchpad, meanwhile, is exceptionally smooth and exudes a premium feel, with left-and-right click buttons offering satisfying feedback. The only critical point is that it could have been more expansive, especially considering how wide the keyboard is.

This 2-in-1 is packed with plenty of firepower in the form of an Intel Core i7-1065G7 CPU, complemented with 16GB of LPDDR4X SDRAM and 1TB of SSD storage space. But there’s a tinge of disappointment attached to the benchmarking score of 78 generated in our performance testing.

For a 10th-gen Intel Core i7 chip built on the Comet Lake architecture, we’d have expected a stronger result, considering the same chip, when deployed in rival 2-in-1s, performed better. Dell’s XPS 13 2-in-1 registered a score of 99, for instance, while the Surface Laptop 3 scored 104.

Drilling down into the results, it’s clear that while HP’s device is more or less on par in terms of single-threaded performance, its multi-threaded result is weaker when compared against the aforementioned devices. Similarly, a Geekbench 4 single-core result of 5403 isn’t far off the Dell XPS 13’s 5155 and the Surface Laptop 3’s 5517, but its multi-core score of 13,515 represents an underperformance against scores of 15,374 and 18,492 respectively. 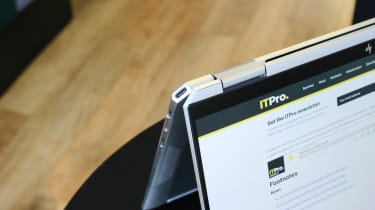 The 2-in-1’s relative struggles can be chalked up to insufficient cooling, with the base of the device warming slightly when being pushed to its limits. This was reflected in readings taken via CoreTemp, which showed a couple of the cores reaching maximum temperatures during testing.

With a battery life of 7hrs 23mins, the Spectre x360 lasts just shy of a full working day. It’s a better-than-average result, and in line with a device like the Microsoft Surface Pro 7, which lasted 7hrs 20mins in our testing.

Among clamshell 2-in-1s, HP’s device dies quicker than the XPS 13 2-in-1’s 9hrs 7mins as well as the Spectre Folio 13-ak0001na’s staggering 17hrs 28mins. This, inevitably, is a consequence of having a 4K display, which is well-known for draining battery life. There’s no questioning the quality of the panel, but 4K isn’t essential to graphics-intensive work, particularly in a 13in device that can be connected to an external monitor. Users are perhaps better off considering the 1080p version of the 2020 Spectre x360 for a battery life-boost, as well as a reduction in cost.

Slimline devices often compromise on connectivity by consequence of a smaller chassis, but HP impresses with the inclusion of 2 USB-C ports with Thunderbolt 3 support, a USB-A port, and a microSD card reader alongside a 3.5mm headphone jack.

Rather niftily, the USB-A port features an extendable latch that expands when you insert a peripheral. It’s especially welcome given that USB-A has been axed in many 13in devices, and the Spectre x360’s slightly deeper chassis is certainly worth putting up with as a trade-off. The primary USB-C port, meanwhile, is neatly fitted into the clipped edge on the right-rear corner of the chassis. 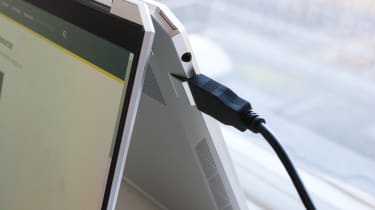 Elsewhere, the 2-in-1 features a switch on its right-hand-side that can turn off the webcam. The lens itself is facial recognition-ready, which is an impressive feat considering how narrow the display’s bezels are. The latest Dell XPS 13, by comparison, has ditched facial recognition to accommodate the webcam being fitted into its display’s slimline borders. The Spectre x360 also includes a fingerprint scanner situated beneath the arrow keys. The device is also fitted with a webcam kill switch, but sadly doesn’t come packaged with the manufacturer’s customary array of security features.

There’s plenty to love about the 2020 Spectre x360 including its quirky angular design, the quality of the display and decent connectivity options. Despite this, HP’s sleek business-grade 2-in-1 falls short in a number of departments, with relatively underwhelming performance compared against leading 2-in-1 devices, and so-so battery life.

Chances are that opting for its 1080p cousin will negate the latter drawback, given the tendency for 4K displays to guzzle battery power, but for its price tag and high-quality build you’d really have expected the Spectre x360 to really carry a bit more oomph.

HP’s premium 2-in-1 is something of a flawed gem, with plenty to shout about but ultimately falling short of greatness due to several minor shortcomings.

How inkjet can transform your business

Journey to a modern workplace with Office 365: which tools and when?

A guide to how Office 365 builds a modern workplace

Modernise and transform your sales organisation

Learn how a modernised sales process can drive your business

Realise the benefits. Mitigate the risks