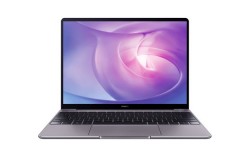 Huawei is best known as one of the largest smartphone vendors and telecom equipment makers in the world. However, the company also offers a respectable line of notebooks and tablets that are worth attention. Huawei just announced their Matebook 13 and MediaPad M5 lite at the Consumer Electronics Show (CES). The successor to the award-winning Matebook X Pro will be available in US stores by the end of the month.

Many people are comparing the Matebook 13 to Apple’s MacBook Pro. Both devices are touted as thin, light, and packed with “market-leading specs”. Apple is currently one of Huawei’s biggest smartphone competitors. Notebook numbers are slightly harder to come by, but it appears that Huawei is also taking on Apple in this category.

Customers will be able to choose between a Matebook 13 with a 8th Gen Intel Core i5 processor, Intel UHD Graphics 620, 8GB of RAM, and 256GB of storage or one with a Core i7 processor, NVIDIA MX150 discrete graphics, 8GB of RAM, and 512GB of NVMe solid-state storage. Both models will incorporate a 13-inch 2K (2160x1440 at 200ppi) FullView Touch Screen.
The Matebook 13 is slightly smaller than the Matebook X Pro. It measures 11.26 inches wide by 8.31 inches deep by 0.59 inches high (roughly 286 X 211 X 14.98 millimeters) and weighs 2.86 pounds (roughly 1.3 kg). The device features a 88% screen-to-body ratio and 0.17” (4.4 mm) bezels. The Matebook 13 also includes a 41.7 Wh battery, a 65W power adapter, a power button with an integrated fingerprint sensor, and a spill-resistant keyboard.
Huawei also boasts that this device features their Shark Fin Design 2.0 cooling solution. Their dual fans separates heat between the CPU and GPU. They have reportedly been able to increase their airflow by more than 25%.

Huawei will also release their new family-friendly MediaPad M5 lite tablet. The device includes a 10.1” (256.54 mm) display with a Full HD IPS screen and quad speakers with Huawei’s Histen 5.0 audio enhancement technology. It also incorporates a 659 octa-core chipset, 3GB of RAM, and 32GB of storage. It runs on Android 8.0 Oreo with EMUI 8.0.

It will be interesting to see how the MediaPad M5 lite competes against other kid-friendly tablets. Many of these tablets ring in at well under $200 USD, while tablets that appeal to both adults and children come with a higher price tag. Huawei’s latest tablet appears to be competing with devices like Apple’s iPad and the Amazon Fire line. Huawei MediaPad M5 lite will be available for $299 USD on Amazon and Newegg in late January.