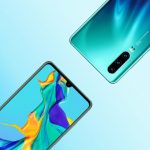 Huawei’s P30 Series smartphones haven’t exactly been shying from the spotlight over the past few weeks. Today, however, we’re getting our first official look at the P30 and P30 Pro. Not surprisingly, these are powerhouse smartphones that can take on the best of what Apple and Samsung currently offer.

The smaller of the two phones is the P30, which comes with a 6.1-inch OLED display with a resolution of 2340x1080 (and an in-display optical fingerprint reader, not ultrasonic). Unlike the Samsung Galaxy S10 family, which has incorporated a punch hole cut-out for the selfie camera(s), the P30 features a more traditional waterdrop notch at the top-center of the display. Interestingly enough, the notch looks remarkably similar to the one found on the Essential Phone, which arguably was the granddaddy of smartphone notches.

Housed within the notch is a selfie camera that features a 32MP sensor. When it comes to photography, there are three cameras on the back of the phone. There’s a 40MP primary sensor, a 16MP wide-angle sensor and an 8MP sensor.

Moving on to the P30 Pro, this smartphone features a larger 6.47-inch OLED display, which retains the same 2340x1080 resolution. Another big differentiator is that the P30 Pro has a total of four cameras on the back: 40MP primary (f/1.6), 20MP ultra-wide (f/2.2), a Time of Flight (ToF) sensor, and a telephoto camera (f/3.4) with 5x optical zoom (thanks to an innovative periscope system and a mirror).

As you would expect, the P30 and P30 Pro are rocking some stout performance credentials. Both phones are powered by Huawei’s Kirin 980 SoC. The former gets 6GB of RAM and 128GB of internal storage, while the latter comes with 8GB of RAM and three storage options: 128GB, 256GB and 512GB.

On the battery front, the P30 and P30 Pro have 3650 mAh and 4200 mAh batteries respectively. Both smartphones support standard and reverse wireless charging, with the P30 Pro able to charge wirelessly at 15W. The P30 Pro also supports 40W SuperCharge over USB-C, which can take the battery from empty to a 70 percent charge in a half hour. The P30, however, can only charge via its USB-C port at a maximum of 22.5W. Other items of note: the P30 features a 3.5mm headphone jack, while the P30 Pro omits it. The P30 is IP53 certified for dust/water resistance, while the P30 Pro is IP68 rated.

Given the tricky position that Huawei is in with the U.S. government, don’t expect to find the smartphones officially available for sale here. However, it will be available in global markets. We'll update this article once pricing has been announced.