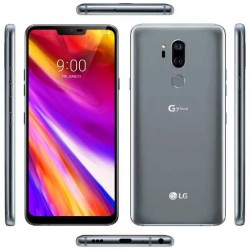 LG isn't exactly playing coy with details on the smartphone it is set to launch on May 2 called the LG G7 ThinQ. A big leak last week unveiled most details of the details on that device. LG was annoyed enough at the leak that it decided to push out official details regarding the G7's super bright display the smartphone will employ. Benchmarks of the device have leaked now to boot. Today, however, LG is offering details on another feature of the device that sounds interesting, literally...

LG is focusing heavily on the audio tech crammed inside the thin and sleek G7 ThinQ smartphone and is fitting the device with something it calls a Boombox Speaker feature. LG says that the speaker design increases the sound level by more than 6dB and doubles the bass response produced. LG is able to make these audio claims because it figured out how to use the extra space inside the smartphone as a resonance chamber.

The feature works particularly well when the smartphone is placed on a flat surface like a table or a box allowing that surface to act as a woofer to further amplify sound. Another slick feature that fans of music and movies will appreciate is the integration of DTS:X 3D sound. This allows the smartphone to create more immersive 3D sound via headphones for music and movies.

LG is also well known for including its 32-bit HiFi Quad DAC in its smartphones and the G7 ThinQ is no exception. LG enabled the new device with a Hi-Fi Quad DAC, similar to what we experienced in the LG V30, V20 and LG G6 before it, that promises lower total harmonic distortion of 0.0002 percent. The G7 will also support MQA format for higher quality music that takes up less storage space as well.