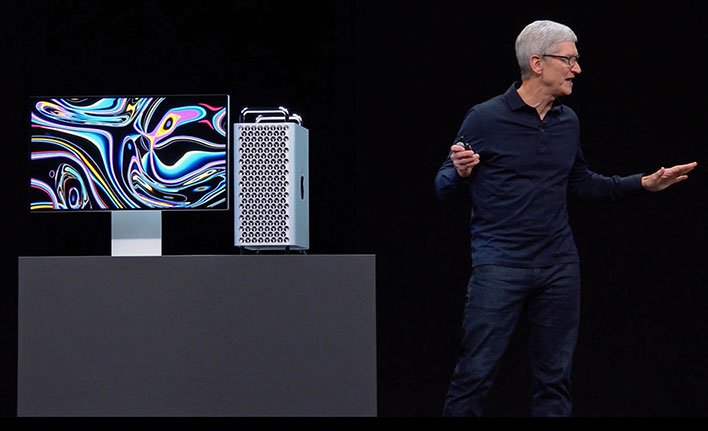 When Apple announced its replacement for the “trash can” Mac Pro, the Mac community collectively lost their minds. The previous generation Mac Pro really was hampered due to thermal constraints, which meant that Apple could never really provide enough top-of-the-line CPU and graphics hardware to satisfy hardcore professional workstation types. The new Mac Pro changes all of that with its more modular, thermally-optimized design.

While many in the Mac community were no doubt over the moon for the new Mac Pro, PC enthusiasts raised more than a few eyebrows as well. After all, 28-core Xeon processors, support for up to 1.5TB of DDR4-29333MHz ECC memory, and up to two AMD Radeon Pro Vega II Duo graphics cards with 56 TFLOPS of compute performance are nothing to sneeze at. But then, we get to the price - $5,999 for an entry-level a base system.

With this in mind, the CEO of Maingear Inc., Wallace Santos, had a thing or two to say about the new Mac Pro and Apple’s commitment (or perhaps lack thereof) to professionals that have stuck by the company over the past few decades. Maingear is a company that HotHardware is well acquainted with, and we’ve reviewed a number of their high-end, custom built gaming rigs over the years. So, when Wallace speaks up, we tend to take note.

The outgoing and upbeat CEO has penned a blog in which he talks about the impact that Apple has had on the industry, and its rather “reactive” nature to the computing industry over the past decade, save for the original iPhone and iPad. With so much attention paid to its consumer-minded iPhone cash cow, Wallace opines that Apple has neglected its loyal enthusiast and professional workstation customers in the process.

“It seems that as of late they are struggling to balance their novice, casual userbase with their more demanding enthusiast and pro users,” Wallace writes. “Trying to serve both userbases is an admirable goal, but the needs of each are typically at odds, and Apple has all but abandoned their pro users.”

This is a common complaint that many people outside of the Cupertino reality distortion field have leveled against Apple for years, and there are plenty of other examples, as both Final Cut Pro and Logic were neutered into prosumer versions of iMovie and Garageband.

“Apple’s Pro software used to be the hook that drew many pro users into their walled garden, leveraging their hardware’s ability to play well within that ecosystem,” Wallace adds. On the hardware side, the aforementioned 5-year lull in Mac Pro updates and artificial limitations that force MacBook Pro users to step up to the more expensive 15-inch model just to get 32GB of RAM.

And we can’t forget about the Apple Tax, which is well on display with the new Mac Pro. The starting price of $5,999 gets you an octa-core (16 threads) Xeon processor, 32GB of DDR-2666 memory, 256GB SSD and a Radeon Pro 580X GPU. Wallace points out that a similarly configured Maingear Vybe (Mk.V) – as you can see in the chart above – is roughly a third of the price of the Mac Pro. If you were to throw $5,999 at Maingear, you’d get an 18-core Xeon, double the memory, an NVIDIA GeForce RTX 2080 Ti GPU and a 2TB SSD, which would absolutely stomp the base Mac Pro.

Then again, it's worth pointing out that the spec configuration list above likely doesn't take into account that the Mac Pro has an Intel Xeon processor with ECC DIMM memory and a pro-grade AMD Radeon Pro 580X GPU. Granted, the latter isn't anymore powerful than the Maingear Radeon RX 590 comparison spec, but pro-viz platform certifications cost money, plain and simple. Regardless, the comparison to the similar level of horsepower between the two systems and the price variance is without question, stark. And side note: a $1000 monitor stand? Apple does seem to have lost its way.

Now don’t get us wrong, ol' Wallace no doubt wants to sell PCs; after all, Maingear is a business.  It’s natural to compare competitive products to Apple and to underscore the extreme price gap that exists with similar hardware. However, you cannot discount his main point that Apple hasn’t exactly put a heavy emphasis on its pro user base in recent years, and when it last attempted to do so [hardware wise] with the last generation Mac Pro in 2012, it admittedly failed miserably.

The new Mac Pro is definitely a step in the right direction, and its hardware specs are no doubt impressive. However, the question remains; for previous Apple stalwarts that haven’t already jumped ship to the Windows PC fray in order to gain access to the latest in CPU/GPU technology and firepower, are they really willing to pay the traditionally stiff Apple Tax to stay the course?

Sound off in the comments below if you think the comparison the passionate Maingear CEO made was fair enough...