Microsoft has been very successful with its own line of Surface 2-in-1 machines that include the Surface Pro 6 and Surface Go. In May, a patent surfaced that hinted a Surface Pro 7 with a USB-C port and new type cover was in the works. Earlier this month reports indicated that Microsoft was showing off a dual-screen Surface device to employees. Now, Microsoft has teamed up with a company called Kano for a DIY computer that looks like a chunky Surface Go-style 2-in-1 aimed at kids.

The Kano PC is a computer that kids build themselves and the kit can be preordered for $299.99 with shipping at the end of October 2019. The goal of the Kano PC is to allow kids to build their own computer, learn how it works, and then use the Kano PC to create. The build process promises simple steps to show kids how to build the machine with a "beautiful book and onscreen adventure" and a magnifying glass to examine the parts. 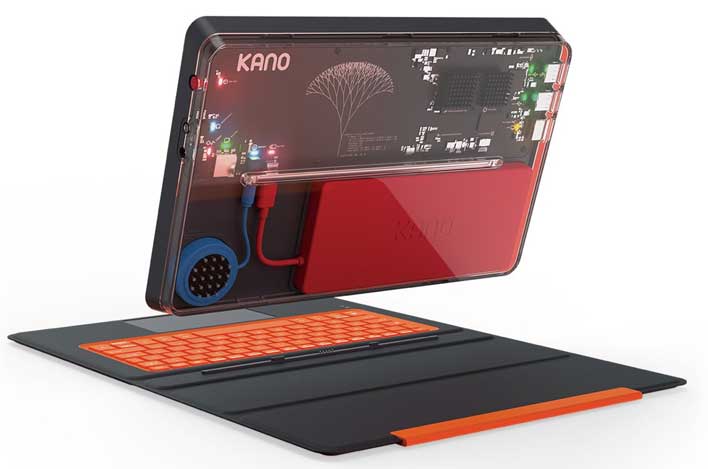 The build process teaches kids about pixels, processors, and binary as they construct the machine. Kano PC runs Windows 10 S, just as the Surface Go does. Kano promises a "personal journey into the operating system," and the machine will give users new projects and challenges with limitless apps promised. Among the challenges are some intended to teach kids to code that level the user up slowly.

The hardware inside the machine features an Intel Atom x5-Z8350 quad-core CPU at 1.44GHz. The processor is paired up with 4GB of RAM, and the device has 64GB of eMMC storage onboard. A MicroSD card slot allows for storage expansion as needed. Kano PC has an 11.6-inch touchscreen and connectivity includes HDMI, one USB 3.0, one USB 2.0, WiFi 802.11 b/g/n dual-band 2.4GHz and 5GHz, and Bluetooth 4.2 LE.