This entry was posted on December 10, 2019 by gigarefurb.

Microsoft has slowly been expanding its lineup of first-party hardware over the last few years. Among the highlights is the Surface Laptop range – a series of lightweight, minimalist ultrabooks that beat the pants off the MacBook Air and even poses a serious challenge to the mighty XPS 13.

The newest addition to this family is the third-generation Surface Laptop. It boasts some nifty new features and some rather promising internal upgrades.

Microsoft’s Surface Laptop series has thus far been pleasingly minimalist, in a rather MacBook-esque way. It’s defined by clean lines and a distinct lack of superfluous visual flourishes, with the main defining feature being the Alcantara fabric covering its keyboard. The same is true of the third generation, which retains this chic appearance.

The new iteration is even more reminiscent of Apple’s notebooks, thanks to the fact that it’s now available in a machined aluminium finish in addition to the traditional Alcantara. The new metal finish is available on the 13.5in model in either black or a new ‘sandstone’ colour, somewhere between bronze and rose gold.

Sadly, fans of the fabric option have fewer colours to choose from than with the Surface Laptop 2; the black colour scheme is only available in the metal finish, and the rather fetching burgundy option has been ditched altogether. Instead, you’ll have to make do with either ‘Cobalt Blue’ or grey. 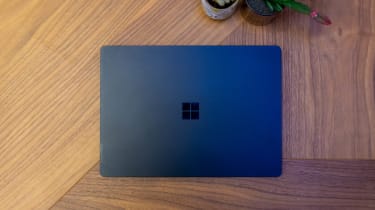 Still, it looks as elegant as ever and is just as portable as its predecessor. In fact, there’s less than 0.3mm separating the thickness from that of the Surface Laptop 3. At 1.3kg, it’s not the lightest laptop we’ve ever tested, but it’s certainly a bearable weight to carry around all day.

There have been a few minor changes to the 13.5in touchscreen display; Microsoft has kept the 201ppi pixel density consistent across the Surface Laptop 2 and 3, which translates to a resolution of 2256 x 1504. The panels, however, are new and Microsoft says they offer better contrast, brightness and viewing angles compared to the previous model.

This is technically true, although the increases aren’t huge. The 364cd/m2 max brightness of the Laptop 3 is just over 5% better than its predecessor, while the contrast is only around 1% better. Coverage of the sRGB colour spectrum is marginally improved too, with a total coverage of 97.5% – although, by default, the screen is set to ‘enhanced’ mode, which tries (poorly) to recreate a DCI-P3 panel. We’d advise switching this off immediately if you’re planning to do anything colour-sensitive.

These improvements may be marginal, but that’s only because the Surface Laptop 2’s screen was so close to perfection to begin with. There’s really nothing to complain about here, and the Surface Laptop 3 packs as good a display as you could ask for on a business machine.

Once again, Microsoft hasn’t tinkered too much with the keyboard for the newest iteration of the Surface Laptop. The main difference is a slightly reduced travel distance – 1.3mm as opposed to 1.5mm for the Surface Laptop 2 – but it’s not a particularly noticeable change, and typing still feels crisp and responsive, with firm feedback and a pleasant clicky feeling when actuated. 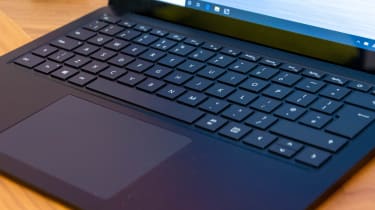 There’s not a huge amount else to say about it in all honesty – the keyboards for Microsoft’s first-party devices offer great typing experiences, and the Surface Laptop 3 doesn’t appear to have dampened its appeal in this regard.

There is, however, a bit more to say about the touchpad. It’s 20% larger, for a start, although there’s still a bit of excess room between the edge of the trackpad and the keyboard that Microsoft could have taken advantage of. Thankfully, it’s still as smooth and satisfying to use as last year’s model.

So far, the changes from the previous generation of Surface Laptop have been relatively minor, with the exception of the new size and finish. Now we start getting to the real meat of the upgrades: the internal hardware. Microsoft has made some pretty bold claims about the performance improvements of the Laptop 3, including 2x faster performance than its predecessor and 3x better speeds than the MacBook Air (although this is not much of a claim, considering the Air’s rather lacklustre performance and Y-series CPU).

All this increased power comes courtesy of a 10th-gen Intel CPU, and not just any CPU either: the Surface Laptop 3 will come fitted with Intel’s newest 10nm Ice Lake processors. Just like the 2nd-gen model, the new Laptop will come in Core i5 and Core i7 variants – more specifically, it will use either the i5-1035G7 with 8GB of RAM, or the i7-1065G7 with 16GB.

In our testing, the difference between these two configurations was stark; while the Core i7 model clocked up a meaty overall score of 104 – as we’d expect from a 10th-gen processor with adequate cooling – the Core i5 model managed an overall result of just 64. We were expecting a little more oomph out of it, despite the fact that it’s a Core i5, and to put it in perspective, the Surface Laptop 2’s Core i5 chip scored 20 points higher. 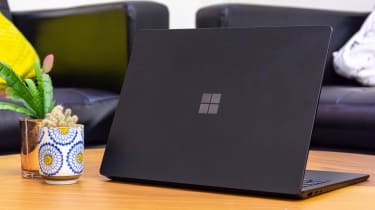 That’s disappointing, but it also throws the Surface Pro 7’s result into sharp relief – that only achieved four more points than the Core i5 Laptop 3, despite having an i7 chip. In practical terms, both configurations of the Surface Laptop 3 will be plenty powerful for day-to-day tasks and even some light photo editing, but anything more strenuous and the Core i5 will start to creak a little. If you’re wanting a machine that can handle slightly more demanding workloads, it’s worth splashing out on the Core i7.

Thankfully, battery life is one area where there have been a few unequivocal improvements. A score of 8hrs 48mins for the Core i5 model in our battery tests is more than an hour and a half better than its predecessor, and we’re gratified to see that the Core i7’s battery life is only half an hour shorter.

The inclusion of proper a USB-C port means that you’re no longer shackled to the proprietary charging cable, but there are advantages to lugging it around. The main benefit is that fast-charging is now on offer, and Microsoft claims that just one hour of charging will see the machine back at 80% power.

Aside from the fancy new processors, the biggest change with the Surface Laptop 3 (and indeed all of Microsoft’s newly-announced products) is the addition of one of fans’ most commonly-requested features: a USB C port.

Microsoft is very late to the game in this regard, and both previous Surface Laptops have made do with a USB A and a mini Displayport, but the company has finally gotten with the times and replaced the latter with a proper USB C 3.1 Gen 2 port, supporting power, data and display output. There’s no Thunderbolt 3 support, sadly, but hey – baby steps, right? 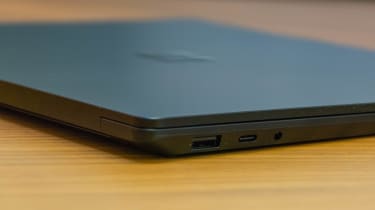 What there is support for, however, is Wi-Fi 6, which should mean you’re future-proofed for the upcoming generation of wireless routers. Another business-friendly feature is the twin ‘Studio’ microphones which, combined with the ‘Omnisonic’ speakers, have been designed for better video and conference calls.

Last but not least: the most intriguing new feature is that, according to the manufacturer, the Surface Laptop 3 is ‘modular’. This sounds a lot fancier than it actually is – in reality, it just means that the device is user-repairable – but it’s still an absolutely fascinating move. The four rubber feet on the underside of the laptop pop off to reveal screw holes, which can be undone to allow the keyboard to be removed, providing access the internal components.

The SSD, in particular, is fitted to be easily replaceable, and the whole thing has been designed to be more serviceable and repairable. It should be noted, however, that this is explicitly aimed at enterprise clients; the process requires special tools and instructions, which will only be provided to authorised entities like approved technicians and partners. Still, for large enterprises, this will be a welcome feature that puts Microsoft in a much better position to take on enterprise-friendly vendors like Fujitsu and Dell.

Despite a handful of shortcomings, the Surface Laptop 2 was one of our favourite devices of last year, thanks to a sleek design and capable performance. The third entry in the series has addressed the main niggles that we had, and aside from lacklustre performance in the Core i5 model, there’s really not much at all to complain about.

The IT Pro guide to Windows 10 migration

Everything you need to know for a successful transition

Managing security risk and compliance in a challenging landscape

How key technology partners grow with your organisation