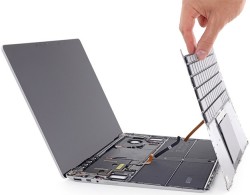 We have said it before and it bears repeating—the majority of today's mobile devices are simply not built with do-it-yourself repairability in mind. Some products are worse than others when it comes to home repairs and upgrades. Two products that fall into that "worse than others" category both belong to Microsoft—its latest Surface Laptop and Surface Pro models, both of which failed to make a positive impression during a teardown analysis.

The folks at iFixIt show no bias when it comes to tearing apart electronic gadgets. We mention this because Apple is notorious for intentionally making its products difficult to repair or service at home, but clearly the Cupertino outfit is not the only culprit. If you add the two repairability scores of the Surface Laptop and Surface Pro, the combined tally only comes to 1 out of 10. Yeah, it's like that.

Let's start with the 13.5-inch Surface Laptop. Rather than use screws to hold the chassis together, getting inside the Surface Laptop requires peeling up the fabric cover that surrounds the keyboard. It becomes clear from the early going that this is a one-way street.

"Jimmy in hand, we start popping clips and peeling adhesive. Already, this doesn't feel like it's going back together," iFixIt notes. "We try to remove the fabric cover, but the going gets a lot tougher south of the keyboard."

That is because there is a metal shield underneath with even more adhesive and plastic bits holding down the fort. The clips prove to be "weak ultrasonic spot welds" that are not reusable. The verdict from the moment you tear into this thing is that it's "definitely not going back together without a roll of duct tape."

More challenges await. The keyboard plate is held with a long cable connecting it to the body, but the connector itself is trapped under a clip-on shield on the motherboard. The design is actually fairly common among Surface devices (and challenging).

In the end, the Surface Laptop scored a 0 out of 10 repairablity score. Clearly "this laptop is not meant to be opened or repaired," and you can't get inside "without inflicting a lot of damage." Even then, just getting to the battery requires several steps—it is "difficult and dangerous to replace." And on top of it all, the CPU, memory, and onboard storage are all soldered to the motherboard.

Getting inside and repairing or upgrading parts from a fifth generation Surface Pro is not much easier. Externally, it looks nearly identical to its predecessor, save for larger vents and a better hinge design. The process of opening it up remains the same—heat up the exterior, suction up the display, and slice through the adhesive with an opening pick.

Once inside, you'll have to remove a few parts before the motherboard is free. There is a heatsink that stands in the way, and once that is plucked, you'll find that the motherboard is trapped under a speaker and a sensor/camera bezel.

Dig down far enough and you will eventually find your way to the battery, which is a "pain to remove." It does not seem to fit back quite the same either. On the plus side, Microsoft swapped out the battery from its previous Surface Pro model for one that has 18 percent more capacity. The 45 Wh battery in the Surface Pro is also considerably more capacious than the 30.8 Wh battery found in the 10.5-inch iPad Pro.

When the dust settled, the Surface Pro emerged with a 1 out of 10 repairabilty score. Technically that is better than the Surface Laptop, but let's be real, neither one is built for DIY servicing. In this case, there is lots of adhesive to contend with, including on the display and battery. The SSD is no longer removable in the Surface Pro, and replacing any of the parts requires removing the display assembly, which is an easy part to damage.

Keep in mind that none of this means these are bad products. The level of difficulty associated with DIY repair represents an unfortunate trend in today's increasingly thin and light portable devices, but the market has spoken and the message is that extreme portability matters. To get around these DIY trade offs, buy the beefiest configuration you can afford to stave off the need for an upgrade, and consider an extended warranty.