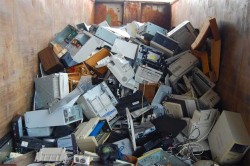 With a new blog post, Microsoft has proven that it's never wise to jump to conclusions on legal cases unless you have a good grasp on them. This week, we reported on an e-waste recycler who was sentenced to prison for 15 months due to selling unofficial Windows install disks, and based on what we knew, it became easy to start hating on Microsoft.

In the company's blog post, Corporate VP of Communications Frank X. Shaw gives great detail on the case, based entirely on publicly available records. While the company clearly has its interests to worry about, the facts laid out here helps paint a far better picture of the criminal activity that was going on.

The first thing Microsoft has cleared up about this case is that it had nothing to do with the prosecution of Eric Lundgren; it was only brought into the case later for expert input. In reality, the case was kicked-off entirely by US Customs after it intercepted clearly counterfeited software. Even after being warned multiple times, Lundgren continued to make his shipments.

There are many little details scattered in Microsoft's post that are noteworthy, but ultimately, a one-and-done argument to solidify your thoughts on the matter could be this: Lundgren didn't just burn installer discs with Microsoft's own tool; he went through great effort to make sure that the resulting discs looked as genuine as possible. These weren't just discs with a Sharpied "Windows 7" label on them.

Further, while it was claimed that these discs were sold for twenty-five cents a piece, some discs were sold for at least $3.50. That might seem almost superfluous, but when you're selling thousands of discs, that turns into some serious profit really quickly. In one email, Lundgren made his intentions clear: "This will ensure a steady income for the next year to come! :)"

Microsoft's beef with Lundgren's actions are two-fold. On one hand, the company has a program in place for people running businesses just like Lundgren's to procure cheap licenses - $25, to be exact. With 28,000 licenses not sold through Microsoft, the company effectively missed out on $700,000 in profit. The second issue is that the software provided simply wasn't legitimate, and worse, it was trying to be.

Ultimately, it's hard to believe that Lundgren didn't realize that what he was doing was illegal, especially in this day and age. If there's a lesson to learn from all of this: don't sell software you don't have the rights to sell. Its a simple rule to live by!