This entry was posted on February 13, 2020 by gigarefurb.

At this point in time, it is reasonable to assume Microsoft is wrapping up work on the upcoming Windows 10 20H1 update, which will be the first of two major upgrades to Windows 10 this year. The Windows Insider program supports this notion—things have slowed down, in terms of what is being introduced. From now until release, it is probably a matter of polishing things up and stomping out bugs, rather than continuing to introduce more features into the mix. So, what can we expect?
First let's talk about how Microsoft handles Windows 10. As with prior versions of Windows, Microsoft dishes out monthly security patches. This come on the second Tuesday of every month, and are often referred to as Patch Tuesday updates. Microsoft also dishes out out-of-band security updates as necessary, like when there is a ransomware outbreak or some other situation that necessitates expedited mitigation.
Starting with Windows 10, Microsoft changed the formula for Windows—instead of releasing new versions of Windows every few years, Windows 10 is a constant work in progress. Microsoft has committed to releasing two major upgrades every year. More recently, Microsoft has scaled things back a tad, and as a result, the last major upgrade (November 2019 Update) felt more like a Service Pack from the days of old, than a true upgrade. Windows 10 20H1 will be a bit bigger in scope.

One of the things Microsoft has talked about and tested is improved disk usage for Windows Search. Microsoft says it heard feedback from users who were frustrated wit "excessive disk and CPU usage, general performance issues, and low perceived value" related to its indexing service.

"Based on this, we’re introducing an algorithm that detects high disk usage and activity, so it can better identify peak usage times and manage the indexer accordingly. We’re also making changes for developers to prevent searches of certain repositories and project folders to improve disk usage," Microsoft says.

Microsoft is also adding four quick web searches to the Search Home. They include... 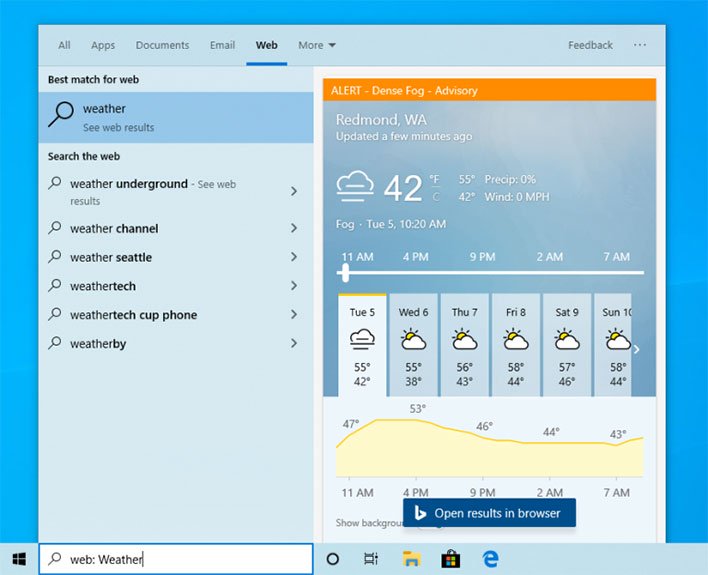 In addition, you can expect a slightly different look to the web preview when presenting search results. It's nothing jarring, though Microsoft notes it made a "few small tweaks," as shown in the image above.

With regards to Cortana, Microsoft is still in the process of expanding language and region support of the new app. Outside of that, the Cortana chat box will not have to be docked in the same place when Windows 10 20H1 rolls out. Users will be able to move the Cortana Windows by the dragging the title bar area, and plop it wherever they want on the desktop, just like any other window. Along with that, users will have the ability to resize the Cortana chat box.

That's not the only change coming to Cortana. Microsoft wants to pivot from it being a question-and-answer exchange to a more conversational approach. Part of that entails a new chat-based UI to foster more natural typing and natural language queries.

On top of that, Microsoft is adding these tidbits to Cortana...

Changes to Cortana are still being fleshed out, so it's possible that other stuff could creep into the equation as well.

The Windows Subsystem for Linux (WSL) is getting some polish and shine in the Windows 10 20H1 update as well. One thing that is coming to WSL is being able to connect WSL 2 Linux applications using localhost. You can see an example above—it shows starting a NodeJS server in a WSL 2 distro, then connecting it in the Edge browser with localhost.

There are third-party utilities available for power users who want to keep tabs on their GPU, and those are still good options. At the same time, Microsoft has made a concerted effort to include some of the same functionality within the Task Manager.

If you fire up the Task Manager right now and punch the Performance tab, you'll notice there is a GPU entry. This mainly shows various usage statistics, including dedicated and shared memory usage. Starting with Windows 10 20H1, however, it will also include temperature monitoring.

"One of the longstanding requests we’ve been tracking for Task Manager is to add temperature monitoring support, and with today’s build we’re making progress on that ask. If you have a dedicated GPU card, we will now bubble up the current temperature next to its listing in the Performance Tab," Microsoft says.

A point of note—this will only work with a dedicated GPU, and not integrated graphics. It might also require an updated GPU driver. And finally, the current implementation being tested in the Insider program only supports Celsius. 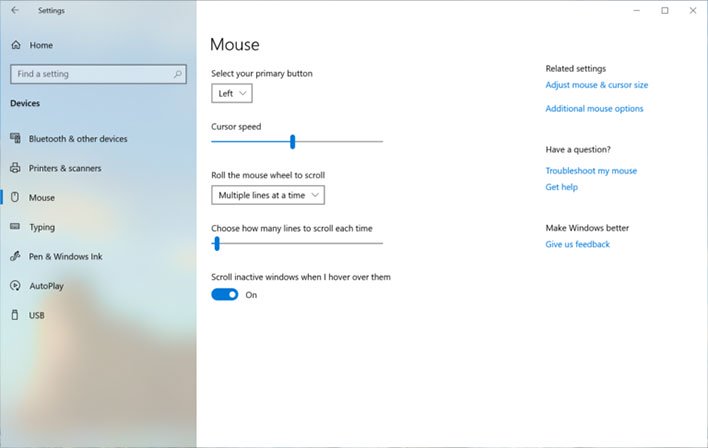 Windows 10 20H1 will also introduce a new mouse cursor speed slider within the Mouse Settings section. Microsoft says this is the latest piece in an effort to converge Settings and Control Panel experiences. It's a minor thing in the grand scheme, but one of several small changes headed to Windows 10 with the upcoming update.

Notepad is getting some love as well. It's been around for over three decades, and with the Windows 10 20H1 rollout, Microsoft is making some small improvements based on user feedback. One of those relates to the find/replace experience in Notepad. 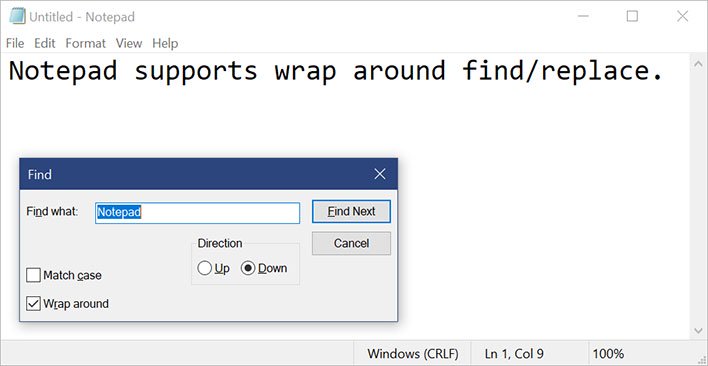 Users will also find a new menu option under View > Zoom to change the zoom level, as well as display the current zoom level in the status bar. Other changes include line numbers with word-wrap (a long requested feature, according to Microsoft), a modified indicator (Notepad will show an asterisk in the title before before the title of a document to denote unsaved changes), and the ability to send feedback directly from Notepad.

Windows 10 20H1 will include a bunch of minor (but appreciated) updates, in addition to some of the bigger ones. For example, one thing currently being tested is the ability to put the Calculator app in an Always on Top mode, which is another result of user feedback. Microsoft is also redesigning the Network Status page in Settings to show all available connection interfaces and to include an integrated data usage meter, there will be Accessibility improvements (including better Eye Control), the ability to reset your PC from the cloud, and more.

As for when the public at large will get their hands on the Windows 10 20H1 update, it will likely arrive in March or April. So at this point, it is just a few weeks away.