It's been a few months now since we first learned about what's in store for Sony's PlayStation 5. Today, it's Microsoft's turn as it delves into high-level details surrounding its next-generation Xbox, which has been developed under the codename Project Scarlett (something which Microsoft acknowledged in teaser trailers leading up to its E3 2019 press conference). 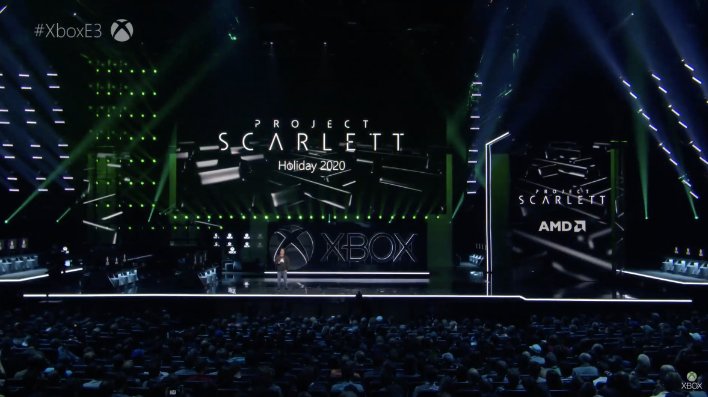 If you've familiar with the hardware details behind the PlayStation 5, then things are pretty similar with respect to the new Xbox console. An AMD 7nm Zen 2-based, octa-core Ryzen 3000 processor is running the show, and that's backed up by a Radeon Navi-based GPU. Given the advances in processing power that have come in the years since the 16nm Jaguar-based CPU and custom Polaris-based GPU found in the Xbox One X, we'd expect huge leaps in overall performance to fuel the next generation of Xbox games.

Thankfully, Microsoft is delivering -- it will be four times as powerful as the current-generation Xbox One X. It will of course pack high-speed GDDR6 memory, and supports variable refresh rates (FreeSync 2) along with hardware real-time ray tracing. Project Scarlett will be able to output at up to 8K, but the console is built for 4K gaming at up to 120fps.

Like the PlayStation 5, Project Scarlett will also come with a high-performance solid state drive (SSD) as standard equipment, which is fast enough to be used as virtual RAM. Compared to the HDD that comes standard on the Xbox One X, Microsoft says that Project Scarlett's SSD is 40x faster which should make for some insanely fast load times.

At this time, Microsoft is saying that Project Scarlett will launch Holiday 2020 alongside the next installment in the Halo franchise: Halo Infinite.