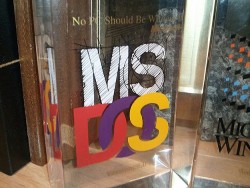 At the risk of dating myself, I cut my teeth on MS-DOS (after moving on from the Commodore 64, that is), the command-line interface operating system that predated Windows. MS-DOS first arrived in the early 1980s, nearly four decades ago, with the most recent (and final) version hitting the scene 18 years ago. For those who are curious, or perhaps feeling nostalgic, Microsoft is re-open sourcing MS-DOS on GitHub.

Microsoft actually already released the source code to MS-DOS 1.25 and 2.0 once before, through the Computer History Museum in March 2014. It contained a brief history how MS-DOS came to be, along with a bunch of links for further reading. So why re-release it to GitHub if the open-source code was already out there?

"Because it's much easier to find, read, and refer to MS-DOS source files if they're in a GitHub repo than in the original downloadable compressed archive file," Microsoft explains.

We have little doubt that part of Microsoft's motivation also comes from owning GitHub, having acquired the popular open-source repository this past summer for a cool $7.5 billion.

"Microsoft is a developer-first company, and by joining forces with GitHub we strengthen our commitment to developer freedom, openness and innovation," said Microsoft CEO Satya Nadella. "We recognize the community responsibility we take on with this agreement and will do our best work to empower every developer to build, innovate and solve the world’s most pressing challenges."

All of the source code for MS-DOS 1.25 and 2.0 was written in 8086 assembly code. Version 1.25 is comprised of just seven source files, including the original MS-DOS command-line shell (command.asm), with the binaries chewing up a mere 12 kilobytes of memory. That's pretty remarkable.

Re-releasing the source code won't exactly have a rippling effect on the computing community, both because MS-DOS is a relic from a much earlier era of computing, and because programs like DOSBox already offer MS-DOS emulation for older games and applications that might still require it. Still, it's pretty neat that Microsoft has done this.

Do you have any MS-DOS memories? If so, share them in the comments section below. And if not, let us know what early OS you cut your own teeth on.