This entry was posted on November 5, 2019 by gigarefurb. 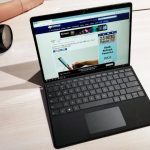 Microsoft launched its highly anticipated -- and might we say good lookin' -- Surface Pro X convertible early last month. The device is notable for its inclusion of a custom, Qualcomm-based Microsoft SQ1 SoC. The SQ1 is an offshoot of the Snapdragon 8xc, and thus is an ARM-based design rather than the x86 processors from Intel that Microsoft has typically used.

Today, the Surface Pro X is finally shipping with prices starting at $999. That price will get you a device configured with 8GB of RAM and a 128GB storage. Opting for the $1,499 mid-range configuration will get you 16GB of RAM and a 256GB SSD. Finally, the flagship model is priced at $1,799 and doubles storage capacity to 512GB.

The Surface Pro X is fitted with a 13-inch 2880x1920 display (3:2 aspect ratio), and comes with the trick kickstand that you expect from Surface convertibles. Microsoft has added a couple of USB-C ports to the device, and it has an integrated LTE modem thanks to the SQ1's Snapdragon roots. With a chassis that measures use 5.3mm thick and weighing in at just 1.68 pounds without its optional Type Cover, the Surface Pro X looks to make a compelling case for itself.

However, early reviews are in for the device, and some of the same complaints we've seen leveled at previous ARM-based Windows 10 devices are applicable to the Surface Pro X. For starters, there's the issue of app compatibility. The Surface Pro X can't run 64-bit x86 apps, which limits its usefulness for certain workflows. And while the Surface Pro X can run 32-bit versions of these apps -- if they are available -- it can only do using software emulation which results in a performance hit.

"For instance, when I ran the WebXPRT 2015 browser benchmark in Edge, I got a score of 372," Gizmodo explained. "But when I ran the test again in Chrome, numbers fell by nearly 40 percent to 226." Gizmodo also was disappointed that the widely used Adobe Creative Suite doesn't support ARM64.

"Everybody has one or two apps they absolutely need to do their job," added The Verge. "With the Surface Pro X, there’s no real way to know if it will run well (or at all) without doing a ton of research ahead of time. Dropbox, for example, only works as an insular 'S-Mode' app and can’t sync your files automatically."

As to the issue of performance, the reviews in general confirm that for the price, the Surface Pro X simply doesn't stack up favorably against its x86-64 counterparts. "There are still occasional, confounding slowdowns, especially when waking from sleep," The Verge noted. "But it wasn’t fast, certainly not as fast as an equivalently priced Intel device would be. Still, the main problem with this ARM chip doesn’t come from slowness with Windows itself, but with many of the apps."

"Barely a day after I started testing the Surface Pro X, it hung on me twice. The first time, I was trying to adjust the screen brightness and the panel stopped reacting," wrote Engadget. "It refused to get brighter or dimmer, no matter if I was using keyboard shortcuts, the sidebar slider and or even display settings."

And despite the incredibly efficient ARM processor being used in the Surface Pro X, battery life also didn't really stand out as a big plus for Microsoft compared to its more traditional rivals (or even the Surface Pro 6).

So, it appears that the Surface Pro X remains somewhat of an enigma, just as other Windows 10 on ARM devices that have been released before it. The hardware itself shows a lot of promise, but it is mainly let down by app compatibility issues and emulation when running 32-bit x86 apps. Hopefully the situation will absolve itself as more developers code their apps to natively support ARM64.