This entry was posted on September 28, 2017 by gigarefurb. 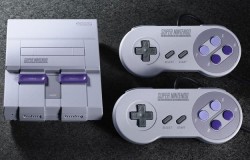 Both retro-themed systems use the same off-the-shelf components consisting of an Allwinnwer R16 system-on-chip (SoC) with four ARM Cortex-A7 cores and an ARM Mali 400 MP2 GPU, flanked by a 256GB DDR3 memory module produced by Hynix and 512MB of NAND flash memory for storage chores. Even the internal cabling is the unchanged, snaking out in the same spots.

Though the casings are different, each one built to resemble a mini version of the original console being emulated, there are some similarities there as well—the SNES Classic and NES Classic both have the same HDMI and USB placements, and the controller interface is unchanged between the two. Both output to the same 720p resolution (max) as well.

What separates these consoles is the software emulation layer. There is quite a bit that goes into each console's emulation. For example, the software on the SNES Classic not only emulates the pre-loaded games, but also a series of add-on processors that are specific to certain games, such as the Super FX and Super FX2 chips used for Star Fox and Yoshi's Island, and the NEC DSP-1 that was found in Super Mario Kart cartridges.

Using the same hardware should, in theory, make it easy for Nintendo to switch production back to the NES Classic when the time comes—the company said it will make more NES Classic consoles in 2018. It also opens the door to some interesting modding opportunities. It is conceivable that someone will find a way to run emulation software for both the NES Classic and SNES Classic on a single console. At the very least, we suspect it will not take long for modders to hack the SNES Classic and add more games to the mix.

The SNES Classic, which comes with 21 pre-loaded games including Star Fox 2, hits retail tomorrow (September 29), with an MSRP set at $80. Stores are likely to sell out of whatever inventory they have in short order.