NVIDIA announced that it's now offering a bundle of rare Fortnite gear with GeForce GTX 1070 Ti, GTX 1070 and GTX 1060 graphics cards. The new gear includes a specialized Reflex outfit that comes equipped with a Response Unit on its back. The bundle also contains a Pivot Glider, an Angular Axe pickaxe and 2000 V-Bucks. With the exception of the 2000 V-Bucks, NVIDIA said that this gear will only be available as part of this bundle. NVIDIA also announced it would extend its Monster Hunter: World bundle which is available on the same GPUs. 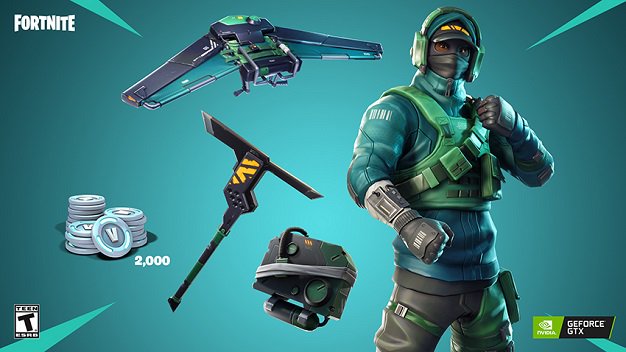 What's really interesting about NVIDIA's GeForce GTX Fortnite bundle is the timing. This bundle comes shortly after AMD started bundling a number of new 2019 games with high-end Vega and Radeon RX 500 series GPUs. The GeForce Fortnite bundle appears to be NVIDIA's counterpunch to AMD's Radeon RX bundles, but instead of using next-gen games NVIDIA is relying entirely on the popularity of Fortnite to win the fight.

Fortnite has undeniably become one of the most popular games today, but if your purchasing decision comes down to the game bundle, you would really have to love Fortnite to side with NVIDIA on this. AMD's game bundle includes Devil May Cry 5, Tom Clancy's: The Division 2 and the Resident Evil 2 remake, all of which are set to be released in 2019. As a result, the value of AMD's game bundle is significantly higher.

It's also interesting to note that NVIDIA is only offering this bundle with its last-gen graphics cards. This gives the impression that NVIDIA is looking to clear out some of its older inventory. NVIDIA has already released three SKUs in its next-gen GeForce RTX series, but all of these are high-end SKUs.

If you are interested in taking advantage of NVIDIA's Fortnite bundle, you just need to purchase any GeForce GTX 1060, GTX 1070 or GTX 1070 Ti from an authorized retailer before January 29. If you also want to get a free copy of Monster Hunter: World, this bundle will also be available until January 7.