This entry was posted on October 2, 2020 by gigarefurb. 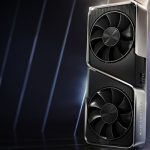 You may have noticed that NVIDIA lists a new release date for the GeForce RTX 3070 Founders Edition on its website. Instead of launching to retail on October 15, as originally scheduled, it will now find its way to market on October 29. That is the new date for all GeForce RTX 3070 cards, including both its own Founders Edition model and custom variants by its add-in board partners. Why the delay?
According to NVIDIA, it was a couple more weeks to bolster supply, given how rabid the demand was for the GeForce RTX 3080 and GeForce RTX 3090. Both of those cards sold out pretty much immediately, leading to ridiculous prices at places like eBay where scalpers hoped to cash in on the craze. It also did not help that gamers were competing against scripted bots for inventory.
"Production of GeForce RTX 3070 graphics cards are ramping quickly. We’ve heard from many of you that there should be more cards available on launch day. To help make that happen, we are updating the availability date to Thursday, October 29th," NVIDIA stated in blog post.

"We know this may be disappointing to those eager to purchase a GeForce RTX 3070 as soon as possible, however this shift will help our global partners get more graphics cards into the hands of gamers on launch day," NVIDIA added.

Indeed, I have little doubt the GeForce RTX 3070 will sell out just as quickly, and I am skeptical that a two-week delay will do much. Priced at $499, the GeForce RTX 3070 could end up being the most popular card of the bunch. It is certainly the most affordable (until new SKUs are announced, like potentially the GeForce RTX 3060 Ti), and NVIDIA claims it offers "similar or faster performance" than last generation's GeForce RTX 2080 Ti, which debuted for $999 (or $1,199 for the Founders Edition model).
But is there more at play here? Pushing back the release is not going to change that fact gamers can't buy one on October 15, because now there will be zero units available on that day. And how many more units can NVIDIA make in two weeks? It's been that long since the $699 GeForce RTX 3080 landed at retail, and it's still out of stock.
This is purely speculation on my part, but I do not think it is a coincidence that NVIDIA's delayed launch falls one day after AMD is set to announce its Radeon RX 6000 series. If that is the case, NVIDIA must be confident that its GeForce RTX 3070 will be more compelling than whatever AMD unveils at or around the same price point.