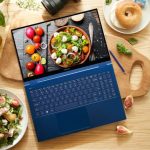 Samsung today just announced a pair of new laptops that are destined to replace its existing Notebook 9 Series devices. We present you with the Intel Project Athena-verified Galaxy Book Flex and Galaxy Book Ion; the former is a 2-in-1 convertible while the latter is a traditional laptop.

Both devices use 13.3-inch or 15.6-inch Full HD (1920x1080) panels that include QLED technology. QLED panels are usually found on Samsung's big screen televisions, and this is the first application of the technology in mobile devices. 13.3-inch models use Intel integrated graphics, while the larger 15.6 models have room to accommodate an NVIDIA GeForce MX250 discrete GPU.

Other features shared between the Galaxy Book Flex and Ion include up to 1TB of storage via a PCIe SSD, Wi-Fi 6, fingerprint biometric security, AKG stereo speakers, backlit keyboards, dual Thunderbolt 3 ports, and an integrated 69.7 Whr battery (which should be good for at least 9 hours of battery life). Another interesting feature is that there is Wireless PowerShare functionality built in the touchpad for charging your Qi-enabled smartphone or Galaxy Buds. That feature wouldn’t be of much use if you’re actively using your laptop, but we guess it could be beneficial if your laptop is sitting idle and unused.

In other Intel-related news, Samsung announced that it is also working on a Galaxy Book S device that uses a 10nm Lakefield SoC. For those unfamiliar with Lakefield, it uses Intel's Foveros 3D stacking technology to pack in Sunny Cover CPU cores and incredible amount of functionality (including LTE connectivity) into a tiny, low-power chip. Although Samsung hasn't given a launch date for the Lakefield-powered Galaxy Book S, it says that it will the first such device to arrive on the market, likely beating out Microsoft's Surface Neo.