This entry was posted on September 29, 2017 by gigarefurb. 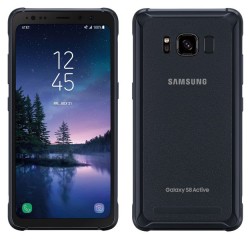 Choice is a good thing, though anyone who has ever wanted a rugged version of Samsung's Galaxy phones (dubbed "Active") would have to receive wireless service from AT&T. That is because Samsung's rugged variants have always been exclusive to AT&T (save for the Galaxy S5 Sport in 2014, essentially a rebranded Galaxy S5 Active for Sprint). That includes the newest Galaxy S8 Active, though perhaps not for long—T-Mobile may be getting its wireless claws on it.

Marketing materials that have not yet been released suggest that T-Mobile will carry a Galaxy S8 Active phone with the model number SM-G892T. AT&T's model is nearly the same, except it has an "A" at the end (SM-G892TA). T-Mobile's variant will be available in the same color options, including Meteor Gray and Titantium Gold.

As to when T-Mobile will start offering a Galaxy S8 Active, that is not yet known. There is no mention of a release date, and places like the FCC that typically tip these sort of things with various filings do not offer up any clues at this time. However, some certification databases do list yet another model, the SM-G892U, with the "U" indicating a universal variant. The assumption is that the Galaxy S8 Active will extend beyond AT&T and T-Mobile at some point, to possibly include Sprint and Verizon, and maybe MVNOs.

The Galaxy S8 Active is a desirable phone for adventure seekers and anyone who is does not want to handle their phone like a fragile egg shell. It is built with durability in mind and can withstand drops, water, and dust.

It is also a reasonably well-equipped phone, with a 5.8-inch 2960x1440 SuperAMOLED display powered by a Qualcomm Snapdragon 835 SoC (system-on-chip) and 4GB of RAM. Other features include 64GB of built-in storage (expandable via microSD), 8-megapixel (front) and 12-megapixel (rear) cameras, a 4,000 mAh battery, and Android 7 Nougat out of the box.