This entry was posted on November 21, 2020 by gigarefurb. 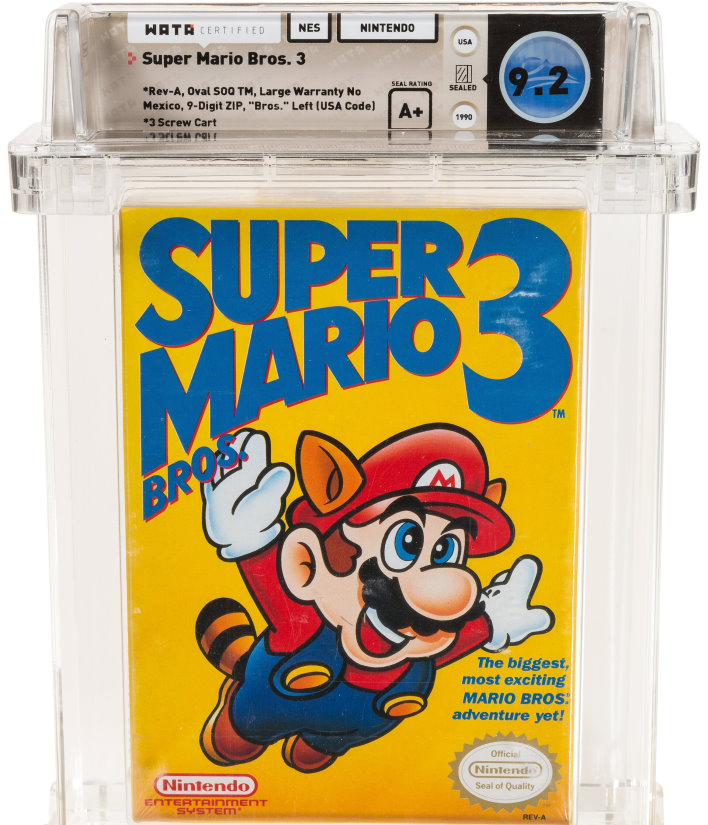 There's something fun about looking at a physical video game collection. That's especially true with retro games for systems like the original Nintendo Entertainment System, when cartridges came in boxes and those boxes were wide enough that the spine can show off some fun concept art. For the collector, it's fun to hunt down and find a variant, where corrections have been made between print runs. Those variants can then become collectible if they're rare enough, especially if the package hasn't been opened.

That's exactly what happened with a copy of Super Mario Bros. 3 for the NES. There's a label variation so rare and sought-after that it seemed unlikely to ever pop up in an unopened box. That all changed yesterday, when Heritage Auctions in Dallas, TX, opened up bidding on an A+ graded sealed copy of the game with a rare box variant. What's so special, you ask? Have a look at the box above, and then at the official box art from Nintendo below.

Do you see the difference? It's pretty subtle. The only change is that the "Bros." in Super Mario Bros. 3 is above Mario's head on the yellow background right here, whereas the copy Heritage Auctions had up for bid had its "Bros." over the top of Mario's white gloved hand. This particular copy was graded by Wata with a score of 9.2, which Wata equates with an A+ grade. For a game that launched 30 years ago, that's very impressive. Likely due to a combination of Mario 3's popularity, the rarity of its box art variant, and the exceptional grade, the bidding began at $62,500.

In all, a total of 20 collectors got in on the action, and the final tally was an astounding $156,000. That beat the previous record of $114,000, which belonged to an unopened copy of the original Super Mario Bros. for the NES, by nearly 37%. The previous record holder was also a rare variant which had cardboard hang tags instead of plastic ones attached to cellophane wrapping. Friday's record sale also contributed the largest chunk of cash on the day towards Heritage's first ever million-dollar video game auction.

That big-money video game auction isn't even completed, either. Heritage has more rare video games on display right now on its website, and bidding will start again tomorrow, the 22nd at 1 PM Central, which is local time for Houston, or 2 PM Eastern. That session includes opened cases of unopened Atari 2600 games, a sealed copy of Super Mario World for the Super NES, and a sealed early production copy of Contra on the NES. If you're interested in getting in on the action, head on over to Heritage Auctions' listings and get ready to spend some dough.