This entry was posted on September 12, 2019 by gigarefurb. 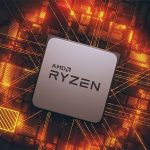 A couple of leaked slides from AMD have found their way to the web, and they show a high level overview of what the Sunnyvale chip designer has in store for consumers through 2022. There are no big surprises, though—the slides essentially reiterate what we already know, which is that Zen 4 in the works on the CPU side, and more Navi GPUs are on the way.

The slides are part of an "AMD Corporate Deck-September 2019" presentation, which we imagine will be made public whole in the not-too-distant future. In the meantime, let's have a looked at leaked slides, courtesy of Guru3D, starting with the one focused on Zen... 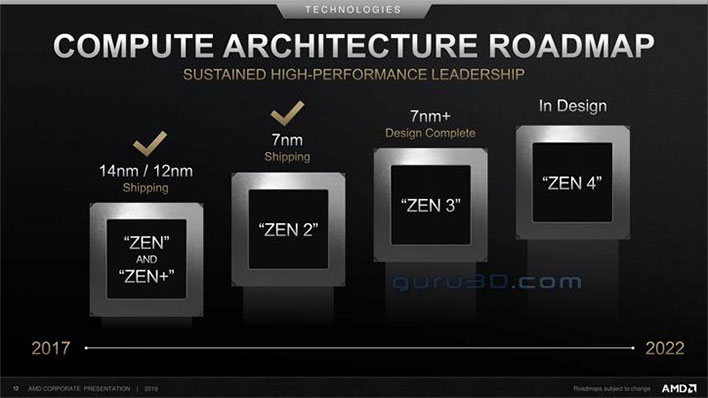 Zen and Zen+ are bunched together, though they actually represent two different generations of Ryzen processors. The recently launched Ryzen 3000 series (or third-generation Ryzen) is based on Zen 2, and those are the first CPUs to be built on a 7-nanometer manufacturing process. They're also the ones that have compelled Intel to complain about benchmark selections when comparing AMD and Intel CPUs.
The slide looks similar to what AMD displayed at its EPYC Horizon Event last month. At the time, AMD talked about having a solid roadmap in place to maintain its momentum. As part of that, AMD revealed it has finished the design phase of Zen 3, which will be built on an enhanced 7nm+ manufacturing process.
There is also a reference to Zen 4. AMD is currently designing the Zen 4 architecture, and it is not yet clear what node the company will use. Incidentally, TSMC in recent months has talked about 6nm and even 5nm, the latter of which is claimed to bring improved logic density by 1.8X over 7nm, albeit as it relates to an ARM processor.

"With 1.8X logic density and 15 percent speed gain and (sic) an ARM A72 core compared with 7nm, we believe our N5 technology is the most competitive in the industry. With the best density, performance, power and the best transistor technology, we expect most of our customers who are using 7nm today will adopt 5nm," TSMC said at the time.

Both of those nodes are possibilities for Zen 4, though we will have to wait and see. 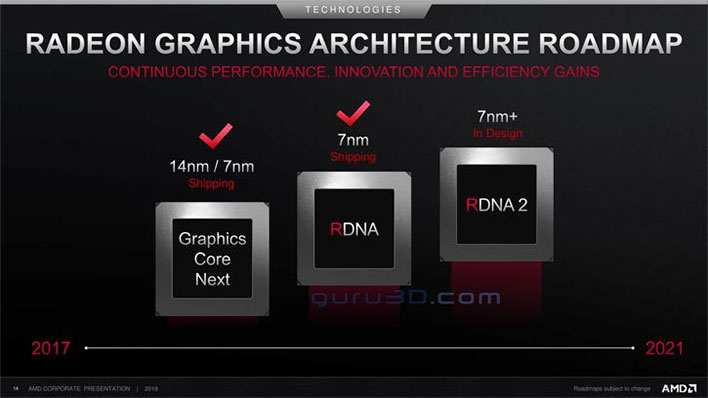 Switching over to graphics, AMD is entering a new era with its Navi GPUs. For Navi, AMD has moved away from its Graphics Core Next (GCN) architecture and is forging ahead with Radeon DNA (RDNA). Current Navi parts are based on the initial RDNA architecture, and like Zen 2, are built on a 7nm manufacturing process.
Looking ahead, the slide references RDNA 2. Like Zen 3, the plan is to build next-gen Navi GPUs (or perhaps a successor to Navi) on a 7nm+ node. Interestingly, the slide stops there. Perhaps that will be the end of the road for Navi, though we know AMD will at least ride Navi through the release of next-gen game consoles, including the PlayStation 5 and Project Scarlett, both due out in 2020.